Commendable Sales For The Month Of April, Amidst Circuit Breaker Measures

FOR IMMEDIATE RELEASE 15 May 2020 – Developers sold a total of 277 units of Private New Homes (Excluding ECs) for the month of April.

Chief Executive Officer of PropNex Realty, Mr Ismail Gafoor mentioned that, “Buyers and Investors were fortunate to have access to showflats in the first 7 days of April. Thereafter, all showflats in Singapore were closed for the remaining 3 weeks. And with the extended circuit breaker measures, it will remain close till end of May as well. Private new home sales for April was Commendable amidst the unprecedented closure of all show flats and with only one major new launch, Kopar at Newton.”

Mr.Ismail further stated that, “It is remarkable that a fair number of transactions occurred during the circuit breaker period. As buyers and investors were purely relying on their virtual tours in their decision-making process. With rightly priced projects continuing to attract the interest of buyers under these circumstances.” 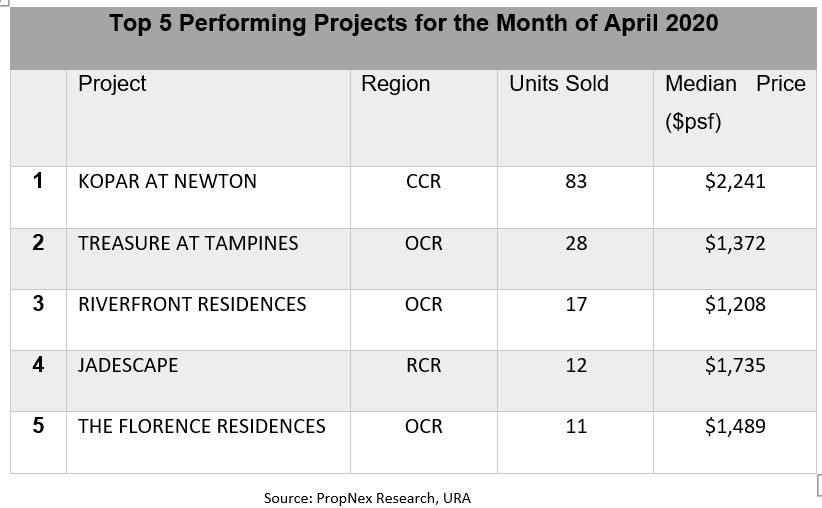 The top 5 best-selling new launches for the month of April were Kopar At Newton, Treasure At Tampines, Riverfront Residences, Jadescape and The Florence Residences. Kopar at Netwon was the top-selling development, with a total of 83 units sold at a median price of $$2,241 psf. While, the second best-selling project was Treasure At Tampines, which sold a total of 28 units at a median price of $1,372 psf.

For the month of May, Mr.Ismail highlighted that, “We can expect a rather challenging period in the month of May. As the entire month is fully subjected to the circuit breaker measures and in the absence of new project launches. However, we are optimistic that projects that are rightly priced will continue to perform well, in the tune of 200 units for the month of May.”