Homebuyers To Return As Covid-19 Concerns Ebb; Mass To Mid-tier Units To Remain Most Popular

29 June 2020 – Mainboard listed PropNex, a leading real estate agency in the region has today released its latest research report which provides a detailed look at the private residential transactions in April and May 2020, when the circuit breaker measures to stem the spread of COVID-19 were implemented in Singapore. It also seeks to evaluate the property buying behaviour of consumers during this time and offer some recommendations to developers and investors as Singapore navigates an uncertain economic environment.

Data compiled by PropNex Research showed that the circuit breaker (which was in place from 7 April to 1 June, inclusive) disrupted market activities and snapped the growth momentum in the property market in April and May after a positive Q1, where 4,269 units (excluding Executive Condominiums) were sold. Total private residential sales plunged, coming in at 647 units in April and 660 units in May 2020 – down sharply from the previous year (1,541 unit in April 2019; 1,843 units in May 2019).

For the month of April, 277 units were transacted in the primary market while 370 resale units found buyers. In May 2020, which saw the entire month affected by the circuit breaker, new home sales surged 75% month-on-month (MOM) to 486 units, while the resale segment slumped 53% to 174 units. 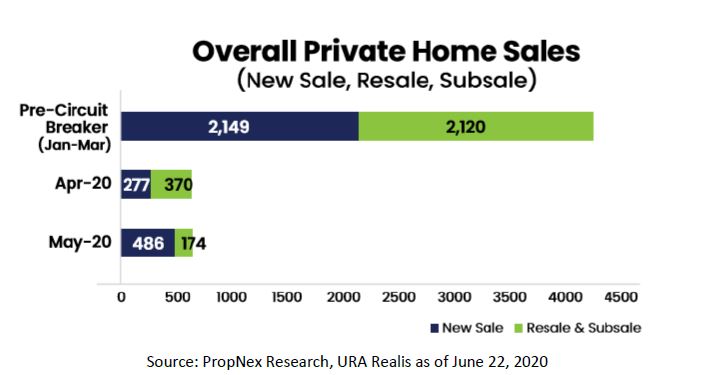 Ismail Gafoor, CEO of PropNex, said, “The inability to view properties during this period has hit the resale market as such buyers usually prefer to examine the unit in person before transacting. In contrast, it was observed that buyers of new homes became more comfortable with digital viewings and transacting online from April to May, with attractively priced projects and low interest rates likely nudging them to make a purchase.”

Post-circuit breaker and with the gradual re-opening of the economy, the cautious sentiment and tepid growth would likely weigh on home buying interest and prices generally. However, the MOM rebound in new home sales in May and the return of buyers to pick up units in Phase 2 of the re-opening is a potential sign of underlying demand, particularly for strategically-priced units.

A larger proportion of homes were sold in the price quantum brackets of under $2 million. The trend was the most pronounced in May 2020 where 95% of new homes sold were valued at $2 million and under – the highest proportion of monthly sales in the first five months of the year. In comparison, it was 89% in April, 90% in March, 92% in February, and 73% in January.

This could be due to a combination of factors, including the sale of a higher number of smaller units and selective discounts offered by developers. These categories of homes – mass market and mid-tier – should continue to drive demand with support from upgraders/owner occupiers. 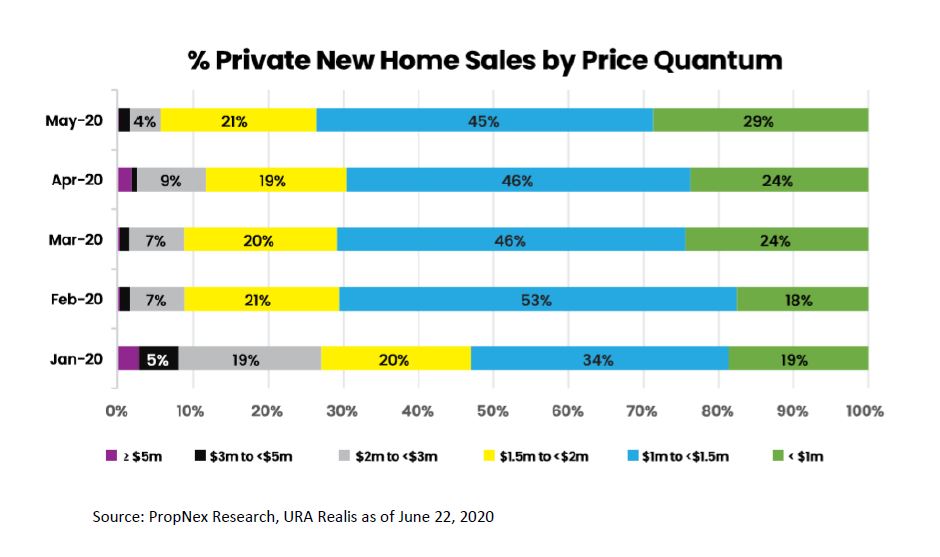 Based on Realis data, the median transacted price for non-landed homes dipped to $1.2 million in May from $1.4 million in January, possibly indicating an increase in demand for more affordable units. 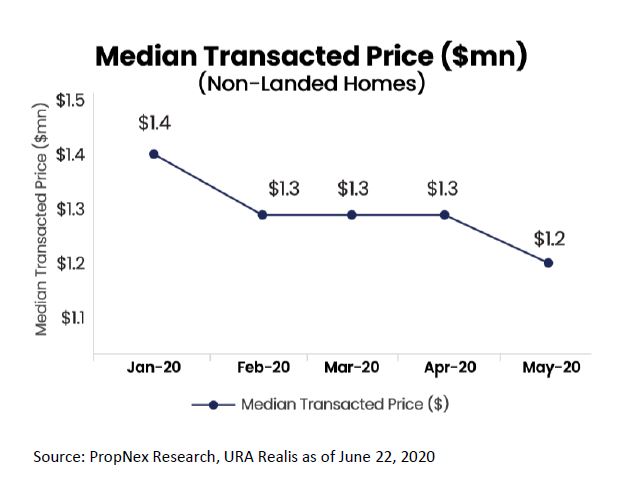 In terms of sizes, homes that are under 800 sq ft have garnered the most interest from buyers and investors. In particular, homes spanning 500 to 800 sq ft were most popular in April and May, accounting for 62% and 54% of the total, respectively. This could point to some investors entering the market to pick up smaller units. It also indicated that buyers at large remain very price sensitive, buying less sizeable units to keep overall quantum affordable. 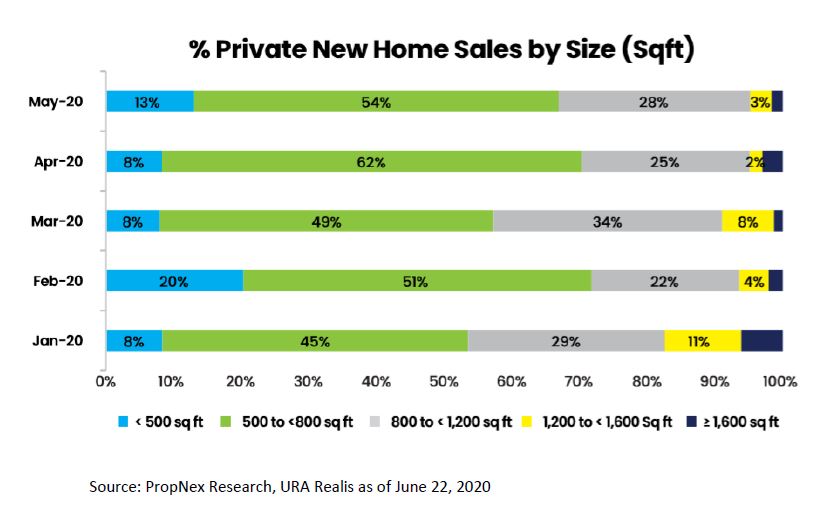 Outlook
As COVID-19 concerns ebb over time, buyers should start to return to the market – particularly those who are more confident about job security or have built up substantial savings for investment. Meanwhile, a subdued economy would help to keep home prices in check and the low interest rate environment continues to be supportive of home financing.

PropNex projects a total of 14,500 to 15,500 private homes – including 8,000 to 8,500 units of new homes and ECs – could be sold this year, barring a resurgence of COVID-19 cases and widespread job losses. Given developers’ holding power and households generally not over-leveraged for property purchase, PropNex does not expect a sharp drop in prices. Overall private home prices are projected to fall by up to 3% for the full-year 2020 as the pandemic drags on.

Wong Siew Ying, Head of Research and Content at PropNex, said, “The pandemic has temporarily derailed the healthy growth in the property market. Going forward, demand and prices should track closely with Singapore’s economy. The long-term outlook for the Singapore residential property market remains positive, as factors that support the housing market - including pro-business policies, safety, and the stable political environment – remain intact. A look back in history paints a resilient picture of the residential market, which has recovered after each crisis with prices generally keeping pace with economic growth.”

In addition, the government has announced nearly $100 billion in stimulus packages to help businesses and protect jobs, which will lend some support to the property market.

Beyond COVID-19: The next normal
When show flats were shut, developers, agents and their agencies, as well as customers have turned to digital platforms in varying degree to market and transact properties. These online engagements via e-learning platforms and marketing tools have translated to steadily rising sales in the past 11 weeks following the imposition of the circuit breaker. Such physical to digital shifts would only grow in importance in the real estate sector.
With remote working gaining prominence, it is perhaps timely to rethink the concept of home and whether they are future-ready. Meanwhile, homebuyers could seize pockets of opportunities as prices fall in line with new market realities amid more subdued outlook. 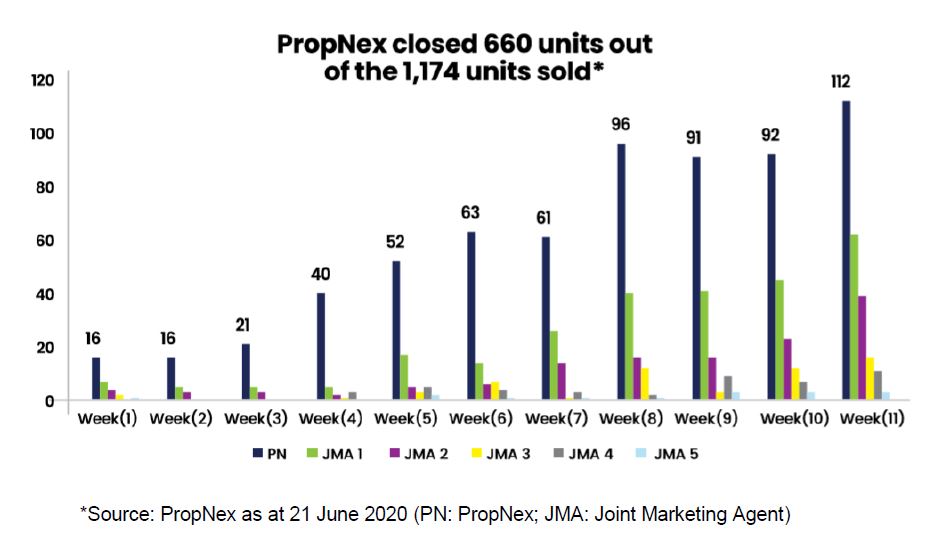