Mr Ismail Gafoor, PropNex Realty CEO said, “The potent combination of the measures has been effective at slowing down the price growth of HDB resale prices. We continue to expect resale prices to fall for the next quarter of the year, but prices may have reached a bottoming-out level as this is the lowest decline in more than 2 years.” Diluted demand due to measures and increased supply

The sustained fall in resale prices is due to the combination of the government’s measures to stabilise the public housing market such as, reducing the Mortgage Servicing Ratio (MSR) cap of 30 per cent and the maximum loan term of 25 years for HDB mortgage loans, three-year wait for new PRs before they can buy resale HDB flats, and allowing singles to buy two-room BTO flats in non-mature estates.

Mr Ismail Gafoor also credits the falling prices to the increased BTO supply. Over 90,000 BTO flats were launched between 2011 and 2014. And in 2015, HDB will launch more than 20,000 new flats for sale, including sale of balance flats (SBF) – such huge supply would have further taken away demand from the resale market, thereby stabilizing prices.

“HDB prices are going through a period of consolidation with marginal price movements as compared to last year when overall resale prices slid 6.2%. With the increased transactions, more buyers are entering the market as current price points are attractive enough for young couples and upgraders – which could also be partly attributed to the non-existence of COV across the board,” concluded Mr Ismail.

In 2015, we expect the overall price drop to be about 3%, with volume exceeding 19,000 units due to the lower asking prices.

Private residential prices fell 1.3 per cent in Q3 — the eighth consecutive quarterly decline since Q4 2013; as cooling measures continue to curb demand. With the private property market continuing to operate in a tight financing and regulatory environment, Singapore’s property market remains firmly in the down-cycle. 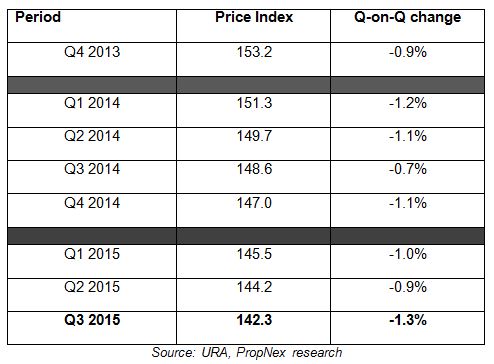 Mr Ismail Gafoor commented, “the scenario is that the relationship between homebuyers, sellers, developers and authorities is a bit of a catch-22. Homebuyers are highly discerning with some holding back their purchases in anticipation of prospective price declines and/or launches in good locations or attractive prices. Developers are selective on when to launch their new projects to avoid ‘bunching’ their products with other competitors which will further dilute demand, with an eye on government stepping in to adjust some of the cooling measures.”

Primary market performance will largely depend on developers finding the right pricing strategy which accurately portrays current sentiments. Buyers will still remain very price sensitive and quantum sensitive and would only commit if they perceive the property to be a good value proposition.

Bigger fall in all segments compared to Q2

The price decline in Q3 was broad-based with homes in both the OCR and RCR sustaining the biggest drops of 1.6 per cent each vs 1.1 per cent and 0.6 per cent respectively. The sustained fall in these segments is largely due to the TDSR; which has affected a buyer’s capacity to take up loans - which is especially critical for middle income buyers. Mr Ismail believes that more potential buyers are finding great difficulty to purchase a second or third home given the lending curbs.

ABSD will also continue to be a stumbling block and will keep affluent home buyers at bay in the CCR. As a result, CCR prices extended its price decline with a 1.2 per cent decline vs. 0.6 per cent in Q2. 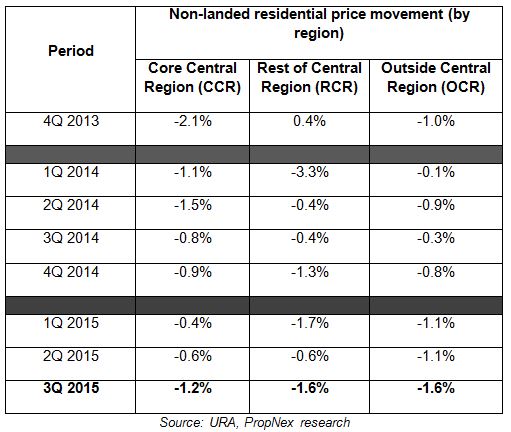 Mounting uncertainties continue to temper demand and weigh down on prices

Tough ongoing property measures to cool HDB resale and large supply of BTO flats will continue to keep some demand away from the private property sector. Sales may remain tepid until there is a tweaking/lifting of the cooling measures, although we do not foresee the government relaxing the measures anytime soon.

In view of these pressures, prices of private residential properties are projected to remain on a moderation path as developers and sellers progressively adjust prices to move units. As such, we forecast prices to dip by about 4.5 to 5 per cent in 2015.

In view of the continued fall in home prices, it could be timely for the authorities to tweak or adjust some of the measures such as the ABSD.