In October, developers sold 546 private homes, a 60 per cent increase from the 341 units taken up in the previous month. Also, 434 units were launched for sale last month, representing an 11 per cent rise from September (excluding ECs). Oct’s sale volume indicates that underlying demand is still present if prices are attractive - despite the relatively weak buying sentiment.

“The 2 new projects in the RCR; Principal Garden and Thomson Impressions helped to push numbers up. They contributed the lion’s share (or 35 per cent) of all new launches in the month and certainly helped to prop up the sales volume in Oct”, explained PropNex CEO Mr Ismail Gafoor.

RCR most active due to new launches 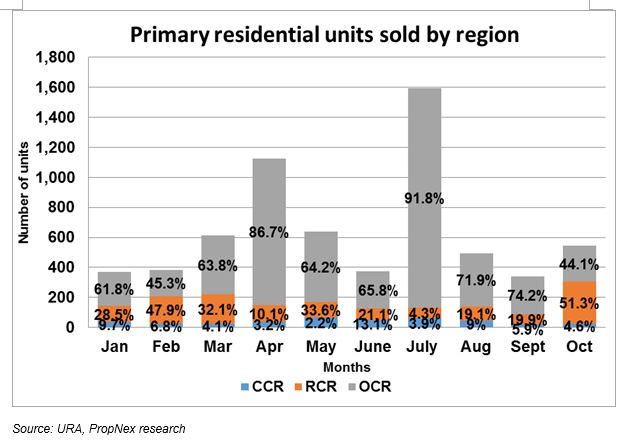 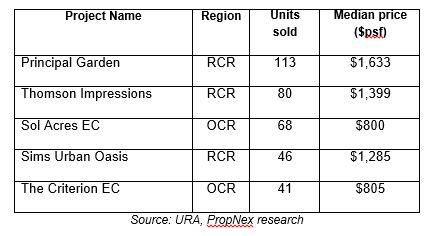 Buyers to be ‘bargain hunting’

“Buying interest will remain selective. Bargain hunting is likely to be the main focus of buyers. There is a definite pick-up in market momentum but whether it can be sustained largely depends on the project’s location and its pricing level,” said Mr Ismail Gafoor.

Notwithstanding the existing muted sentiments, Singapore still holds considerable appeal as an attractive location for property investment. It is supported by sound market fundamentals such as a healthy economy, conducive business environment, high standards of education and living.

Mr Ismail also noted that home seekers will remain selective for the remainder of the year, with a project’s location and price points as the main drivers of demand.

The luxury segment will continue to be weighed down by anemic demand amid the more restrictive home buying environment. The higher price tags of the luxury/super-luxury homes inevitably served as a deterrent as potential buyers will have difficulty in obtaining loans for higher value properties. For foreigners, the ABSD will continue to be a stumbling block in their consideration for a purchase.