New private home sales was up 39% in November from the previous month, mainly due to only 1 major new project which was launched to capitalize on existing demand ahead of the annual school-holiday season. In all, developers launched a total of 734 units with 759 units sold in the month (excluding ECs)—which signaled that underlying demand is not totally absent – but had to be drawn out with good prices and/or projects at good locations.

“The new project (Poiz Residences) in the RCR certainly helped to push numbers up. They contributed the lion’s share (or 36 per cent) of all new launches in the month”, explained PropNex CEO Mr Ismail Gafoor, “developers are also cautious about launching too many units together as they are uncertain about the market's ability to absorb. While the period before the year-end holidays presents a window of opportunity to secure more sales or launch new projects, developers are also concerned that too many projects being launched within a short time frame could dilute marketing efforts and sales take-up.” 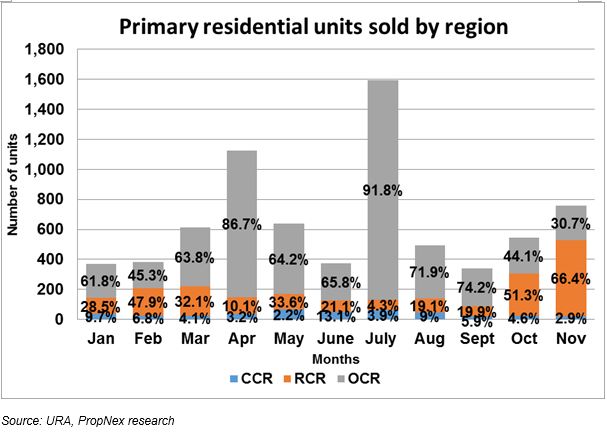 The Poiz Residences - the top performer in November 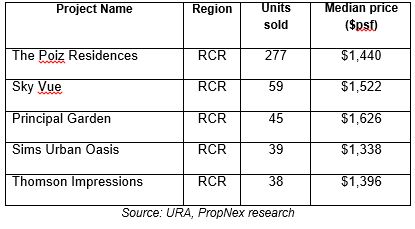 “Buying interest will remain selective. Bargain hunting is likely to be the main focus of buyers. There is a definite pick-up in market momentum but whether it can be sustained largely depends on the project’s location and its pricing level,” said Mr Ismail Gafoor.

Mr Ismail predicts that developers will remain focused on moving units or previously launched projects in December. At the same time, home seekers will remain selective, with a project’s location and price points as the main drivers of demand.

In addition, new private home sales are likely to remain muted until after Chinese New Year in 2016. However, the next hotly anticipated launch will be in Toa Payoh – which is slated to be launched in March 2016.