Mr Ismail Gafoor, PropNex Realty CEO said, “transactions in Q1 tend to be weaker due to the CNY holidays and February being a shorter month. However, transactions are expected to gradually increase due to the falling prices which will slowly attract more buyers to pick up resale units. As such, we expect HDB resale prices to be flattish in 2016, with marginal price movements in 2016.” 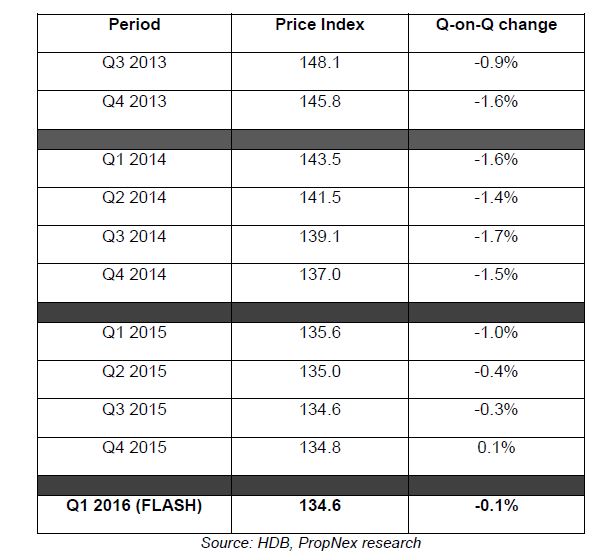 Resale prices expected to be flat in 2016 In 2016, the government will maintain measures to stabilise the public housing market such as the Mortgage Servicing Ratio (MSR) cap of 30 per cent and the maximum loan term of 25 years for HDB mortgage loans, three-year wait for new PRs before they can buy resale HDB flats, and allowing singles to buy two-room BTO flats in non-mature estates.

In addition, HDB will increase the BTO supply (HDB will launch 18,000 new BTO flats in 2016, more than the 15,000 which were launched last year) – which will sap demand from the resale market, thereby stabilizing prices. Mr Ismail predicts that 2016 may spring a surprise as the current price points will entice more buyers to enter the market as it is attractive enough for young couples and/or upgraders – which could also be partly attributed to the non-existence of COV across the board,” says Mr Ismail.

2016 will probably see a price movement of about -1 to +2 per cent, with volume exceeding 20,000 units due to the lower asking prices.

URA’s Q1 2016 data shows that prices of private homes in Singapore fell 0.7 per cent quarter-on-quarter (QoQ), marginally higher than the 0.5 per cent decline in Q4 2015. With the property market continuing to operate in a tight financing and regulatory environment, Singapore’s property market remains within the down-cycle.

"It is obvious that private residential prices is entering a consolidation phase with reduced transactional activity and prices under pressure," said Mr Ismail, “prices are expected to show modest declines or remain flat with price decreases ranging from 0.5 per cent to 1 per cent for the next few quarters”. 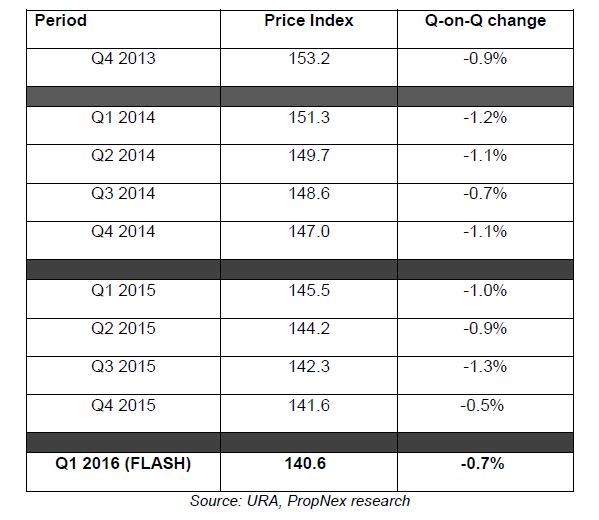 Luxury properties in the CCR bucked the trend by rising 0.4 per cent as affluent home buyers have greater holding power and are able to wait for a suitable offer beforeselling.

RCR prices declined by 0.4 per cent whilst OCR prices registered the biggest fall with a 0.9 per cent fall. The overall price fall in these regions for the year is largely the result of TDSR, which has an impact on the mass market segment where the capacity to take up loans is critical for middle income buyers. Mr Ismail believes that more potential buyers are finding greater difficulty to invest in a private home with a price quantum beyond $1.3 million given the lending curbs.

“The demand for RCR/OCR homes might also be affected by the weaker HDB resale prices. The smaller gain achieved from the sale of their HDB flat will limit their budget for their new private property and may cause some to put their plans on hold because the potential profit is insufficient to allow them to upgrade”.

In addition, secondary market sellers also face stiff competition from developers who are continuing to launch projects at attractive prices and incentives. As such, buyers will have more options – they will only commit if they perceive the property to be a good value proposition. 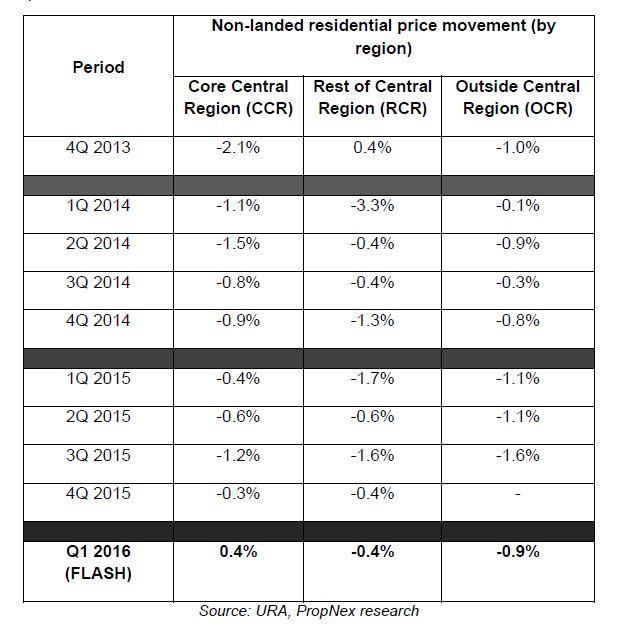 Mr Ismail concludes: “under such an environment, we expect price weakness to persist in 2016, with possible contraction of about 3 per cent.”