The private housing market regained some momentum last month as buyers snapped up units amid a larger number of new units launched, following a lull in June when buyers held off buying and developers held back new offerings to avoid the school holidays. Transaction volume doubled from June, as developers sold a total of 1,901 units, up from 536 sold in the previous month. The number of units launched in July was also higher, at 624, compared to 234 in June (excluding ECs).

“The surge in primary home sales in July was largely in response to the sensitive pricing of the only major private property launch in the month – Lake Grande, which reignited buying interest and accounted for more than 40 per cent of the total number of units sold; the other strong performer was Treasure Crest EC,” continued Mr Ismail Gafoor, CEO of PropNex Realty, “another possibility can also be due to the return of buyers after the June school holidays and possibly some buyers speeding up their decisions to avoid buying during the Hungry Ghost Month”.

Mr Ismail notes that there are still several issues plaguing the private residential market namely; the mounting supply of homes amid the on-going implementation of stringent measures and strict loan curbs continued to weigh on buying sentiments. Lastly, there is an inertia to commitment as buyers remain on the sidelines whilst anticipating further price declines. However, the primary market remains strongly launch driven, as witnessed by the Cairnhill Nine and GEM Residences – the other 2 projects which sold well during their respective launch months in March and May 2016.

With the odds stacked against developers, they will continue to act with caution – taking a slow and deliberate approach in launching their projects, as well as having a competitive pricing strategy to further entice buyers to commit. 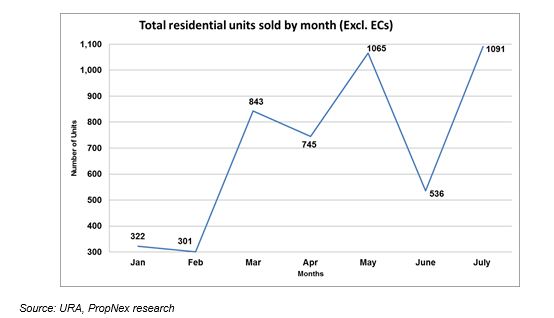 With the presence of price resistance, prices for upcoming new projects will remain competitive as there will be added pressure for developers to price their projects reasonably.

While selected projects which are reasonably priced and well located will continue to attract homebuyers, prices are expected to come under some pressure due to the large oncoming supply. As such, attractive pricing and location remain key drivers in helping developers move units

Sales performance will likely hover at an average of about 500 to 700 units per month for the rest of the year. For the whole of 2016, we envisage sales volume to be between 7,000 to 8,000 units in all. Transactions will continue to be launch-driven; largely dependent on the price and location of the project.

After July’s strong sales, PropNex expects a slowdown again this month due to the August Hungry Ghost Month. We will still see a mix of good and poor take-up rates in upcoming projects. However, we could see healthy monthly sales in the future if more projects are priced realistically at levels that would draw in buyers.