The private housing market gained some momentum last month as buyers snapped up more units amid a larger number of new units launched. Transaction volume more than doubled from September, as developers sold a total of 1,252 units - up from 509 sold in the previous month. The number of units launched was also higher, at 1,467 - compared to 479 in the previous month (all excluding ECs).

The combination of more new units launched for sale and reasonable prices in the increasingly price sensitive market; together drew bargain-hunting homebuyers back to show flats. October’s sales also indicated that underlying demand is still present if prices are attractive. “The surge in primary home sales in October was largely in response to the sensitive pricing of the two major launches in the month – Forest Woods and The Alps Residences, which reignited buying interest and accounted for more than 55 per cent of the total number of units sold,” said Mr Ismail Gafoor, PropNex Realty CEO.

Mr Ismail notes that there are still several issues plaguing the private residential market namely; the mounting supply of homes amid the on-going implementation of stringent measures and strict loan curbs continued to weigh on buying sentiments. There is also an inertia to commitment as buyers remain on the sidelines whilst anticipating further price declines. As such, the primary market remains strongly launch driven, as witnessed by the Cairnhill Nine and GEM Residences – the other 2 projects which sold well during their respective launch months in March and May 2016.

Developers will continue to act with caution – taking a slow and deliberate approach in launching their projects, as well as having a competitive pricing strategy to further entice buyers. 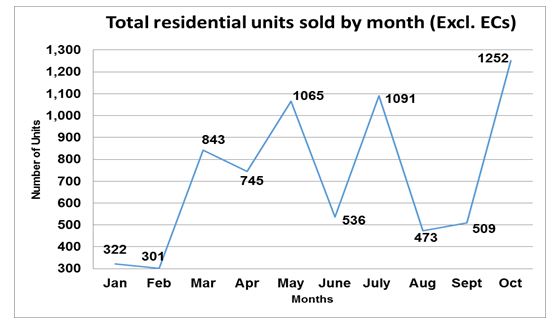 The other top-selling projects in the month were: 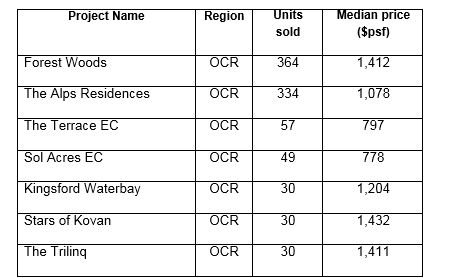 With the presence of price resistance, prices for upcoming new projects will remain competitive as there will be added pressure for developers to price their projects reasonably.

While selected projects which are reasonably priced and well located will continue to attract homebuyers, prices are expected to come under some pressure due to the large oncoming supply. As such, attractive pricing and location remain key drivers in helping developers move units

Sales performance next month will likely hover at about 1,000 units before tapering in December due to the seasonal school holidays. For the whole of 2016, we envisage sales volume to be close to 12,000 units (including ECs). Transactions will continue to be launch-driven; largely dependent on the price and location of the project.

PropNex expects healthy a healthy transaction volume in November due to the recently launched Queen’s Peak and Parc Riviera – which will both generate a reasonable amount of interest due to their good locations.