Lowest dip in private home prices since Q4 2013.
URA’s Q2 2017 Flash Estimates data shows that prices of private homes in Singapore fell 0.3 per cent quarter-on-quarter (Q-o-Q), the lowest dip since prices started to decline in Q4 2013 with the introduction of cooling measures in the same year.
CEO PropNex Realty, Mr Ismail Gafoor commented, “With the lowest dip in the last 15 quarters, this is a clear sign that the private property market is consolidating, with strong volume of transactions witnessed thus far this year. With aggressive land bids and the positive sentiment we expect prices to grow positively by next year.”

“We can also expect more buyers and investors who were at the sidelines to enter the market, taking advantage of the lower prices of properties today.” Mr Ismail also highlighted that he is confident that overall prices in 2017 will drop by marginal 2% as compared to -3.1 per cent in 2016. 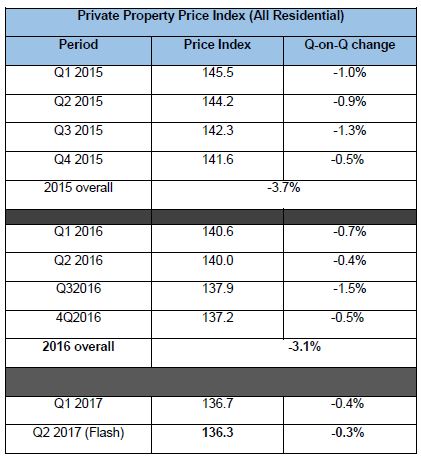 Prices of luxury properties in the CCR fell by 0.9 per cent, which is the highest fall in the last three quarters. Mr Ismail highlighted, “Even though CCR properties are now more affordable than the past 2 or 3 years, we cannot discount the fact that buyers are still price sensitive and cautious, therefore sellers and developers have to be realistic about their pricing. The presence of existing unsold stock does present buyers with many options.”
Mr Ismail expect prices in Core Central Region to drop by 3 per cent in year 2017.

RCR prices witnessed a second straight growth in this quarter, which is the highest growth since Q4 2012 when prices increase by 0.9 per cent.
OCR prices registered a 0.4% decrease after registering a 0.1% growth in the previous quarter. In comparison to the first half of 2016, which registered a -1.8 per cent decrease, in 2017 we witness a decrease of only 0.3 per cent. This demonstrates market stabilization in the outlying areas of Singapore as well. 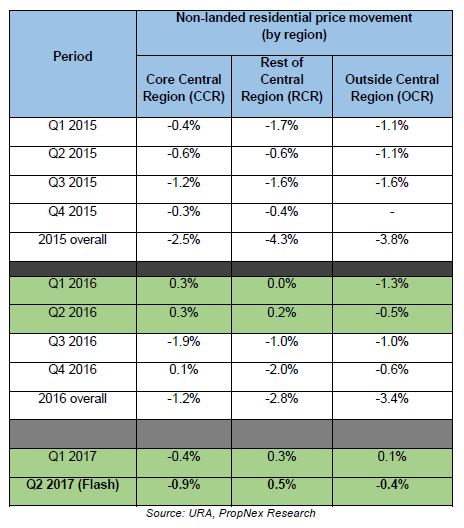 HDB resale prices dipped 0.1 per cent in Q2 2017, a better performance as compared to the 0.5% decline in Q1 2017. CEO Mr Ismail commented, “The current price points are indeed enticing for buyers to enter the market, especially so for young buyers and upgraders. With lower prices, resale transactions in 2017 is expected to surpass 2016 – signaling a return in confidence of the current resale market.” Mr Ismail predicted that 2017 will probably see a price movement of about -1 to +1 per cent, with volume exceeding 22,000 units due to the lower asking prices. 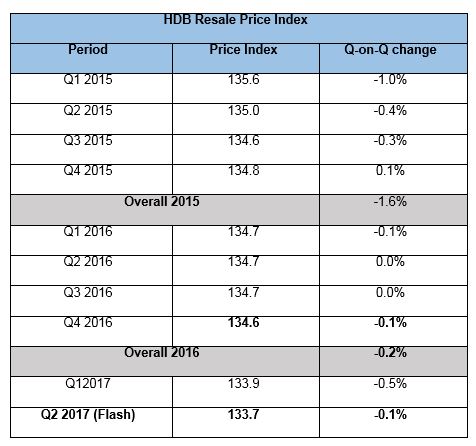