URA latest Private New Homes figures released today depicted a total of 785 private new homes excluding ECs and another 148 units (ECs) transacted in the month of November 2017. November’s performance can be deemed as commendable, despite having only one new launch at Parc Botannia which accounted for 32.2 per cent of units sold. Sales have been strong for all past launches with 71 units sold at Queens Peak at Rest of Central Region (RCR) in November.
“The new private homes figures are seeing a 3.3 percent increase from the previous month of October of 760 units that were transacted (excluding ECs), is attributed to the positive market sentiments and greater confidence as more investors and home upgraders are picking up units that are rightly priced. The strong sense of urgency continues amongst buyers as they sense that developers are likely to increase prices of existing projects in tandem to new project prices in 2018,” commented Mr Ismail Gafoor, CEO of PropNex Realty.

“Sales performance in December and January will likely taper due to the seasonal school holidays and start of a new year; and lack of major projects slated for launch. For the whole of 2017, sales volume is expected to cross 11,600 private properties (excluding ECs) and 4,100 (ECs).” he added.
Parc Botannia in OCR leads in number of transactions

Parc Botannia in OCR leads in number of transactions

A total of 253 units of Parc Botannia were sold in the month of November when it was launched. Besides this, none of the projects crossed the 100 units mark with the top performers as list below: 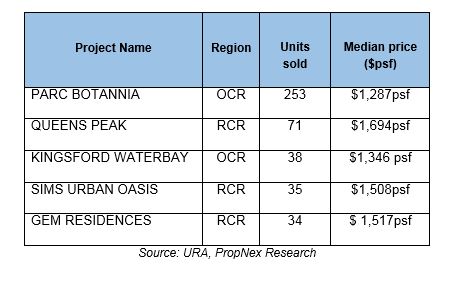