SINGAPORE, 15 March 2021 – Private new home sales took a breather in February on the Lunar New Year festivities and dearth of new project launches during the month. With no projects launched in February – barring J@63, a small project in Telok Kurau - developers sold 645 new homes (excluding Executive Condos) last month. February’s sales volume was down by 60.5% from the strong sales of 1,632 units booked in January, where fresh launches Normanton Park and The Reef At King’s Dock boosted transactions.

When compared to a year ago, last month’s sales were nearly 34% lower than the 976 units shifted in February 2020, where new project The M and several mega developments - such as Treasure At Tampines, Parc Esta, and Jadescape - helped to drive sales.

In February 2021, private new home sales were largely supported by January’s launches. The Reef At King’s Dock and Normanton Park sold 102 and 61 units respectively last month, collectively accounting for 25.3% of the monthly sales. Meanwhile, in the EC segment, a total of 111 new units were transacted in February, with 78 transactions at January’s new launch Parc Central Residences EC in Tampines.

The Rest of Central Region (RCR) led home sales in February, contributing 325 units to monthly sales. Since their launch in January this year, the two RCR projects Normanton Park and The Reef At King’s Dock are 36.9% and 75.1% sold as at February. Meanwhile, 262 new homes were sold in the mass market or Outside Central Region (OCR), with Treasure At Tampines (44 units) driving sales in the sub-market. Over in the Core Central Region (CCR) or high-end home market, developers sold 58 new units last month.

In terms of launches, developers placed a mere 167 new private homes (ex. ECs) on the market in February – sharply down from the 2,600 units (ex. ECs) launched in the previous month.

Ismail Gafoor, CEO of PropNex:
“We do not think that February’s sharp decline in new home sales is in any way an indication that the primary market is losing steam. But rather, it illustrates the fact that the presence of fresh launches has played an instrumental role in stimulating demand and boosting sales in the past months. Without any sizable new launches in February and it coincided with the Lunar New Year break as well, new private home sales were much more muted, at 645 units – the lowest monthly figure since 998 units were shifted in June 2020.

Sales are typically stronger during the launch month, and it is not uncommon for transactions to slow subsequently, as the smaller and more affordable homes as well as choice units have already been snapped up. This is the main reason why sales at new launches tend to taper after a while.

Another reason for the muted sales is that many of the mega projects – which have contributed substantially to home sales last year - have progressively pared down their unsold stock. For instance, the top three best-sellers in 2020, Treasure At Tampines, Parc Clematis, and Jadescape are now about 80%, 75%, and 94% sold, respectively.

In February, we also saw pricier units costing $1.5 million and above accounting for a bigger proportion of sales, as buyers saw value in high-end homes and picked up properties in the RCR and CCR.

Wong Siew Ying, Head of Research and Content, PropNex
“We expect overall new home sales to pick up in March, given the upcoming launches such as The Atelier in Makeway Avenue and Midtown Modern in Tan Quee Lan Street. These two developments are among the fresh projects that are slated for launch in the CCR in the coming months. Other projects will include Irwell Hill Residences near Orchard Road and Peak Residence in Thomson Road.

These upcoming CCR launches should help to lift the sales tally in this sub-market, which we think has held its own in spite of the pandemic and economic downturn last year. In 2020, developers sold 1,260 new private homes in the CCR – which is the sub-market’s strongest annual sales performance in recent years.

With the global vaccination programme underway and the Singapore economy on the mend, consumer confidence has improved and this could attract more prospective buyers and investors to enter the property market, particularly the luxury home segment.” 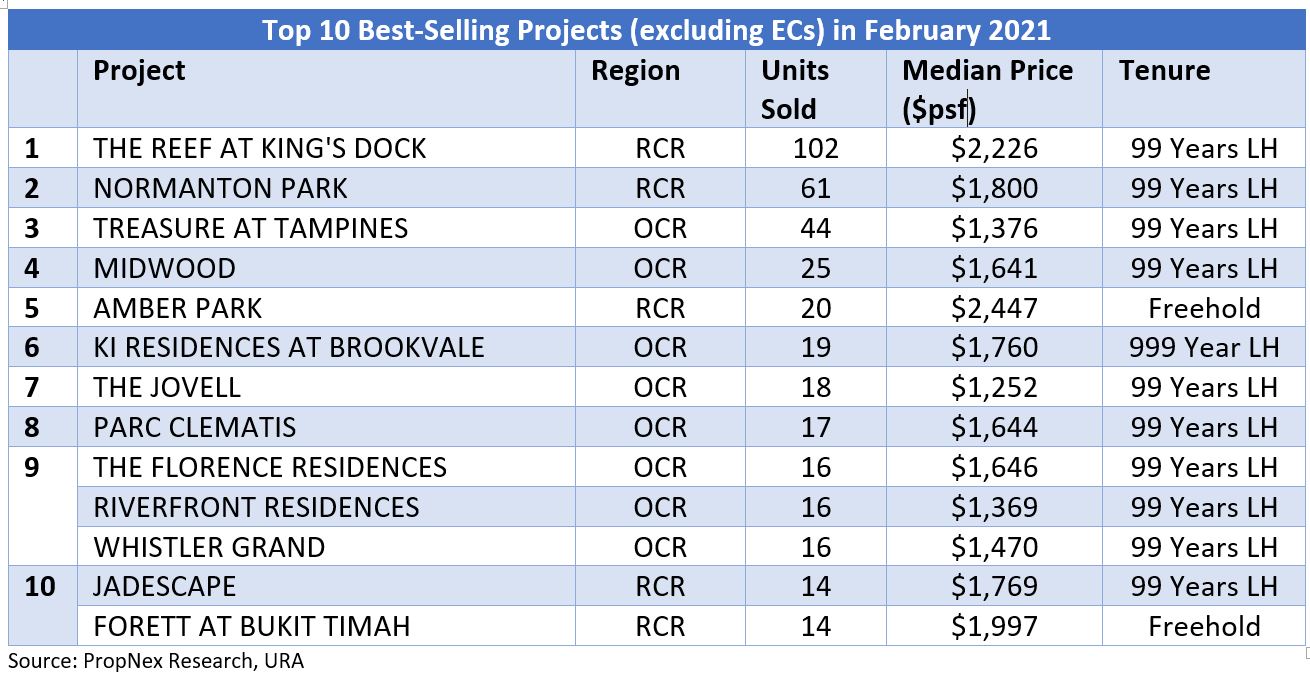